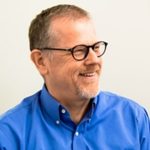 Christopher Lenhardt is a Senior Data Scientist in the Earth Data Science group at the Renaissance Computing Institute (RENCI), a research center in Chapel Hill at the University of North Carolina. Prior to RENCI, Mr. Lenhardt was the director of the NASA-funded Earth observing system data archive, the Distributed Active Archive for Biogeochemical Data at Oak Ridge National Laboratory. His information science and data curation career started with CIESIN (Center for International Earth Science Information Network) at Columbia University. At CIESIN he became CIESIN’s associate director for Information Services, the group responsible for leading-edge science data archiving, metadata generation and management, and user services.  While at CIESIN, Mr. Lenhardt also served as the deputy director for the Socioeconomic Data and Applications Center (SEDAC) another NASA distributed active archive.

He served two terms as a member of the NOAA Data Access and Archiving Requirements Working Group (DAARWG), and served as DAARWG chair. Mr. Lenhardt also leads the Strategic Cooperation Board for the COOPEUS (Cooperation EU-US) project which seeks to align science research infrastructures. Other service and leadership roles include terms as President and Vice-President of ESIP (Federation of Earth Science Information Partners) and he is active at the national and international level in science data organizations. He also served on the board of directors for the Foundation for Earth Science

With research interests ranging from the creation and evolution of socio-technical systems to agile data curation, his expertise supports data science across a number of domains including social science, climate science, natural hazards, and geosciences. He received a master’s in political science from the University of Michigan and a master’s in international relations from the London School of Economics and Political Science.

Before coming to UAlbany, Joseph served as director of the Howard University Program in Atmospheric Sciences (HUPAS), Director of the Howard University Beltsville Center for Climate System Observations, and Deputy Director of the NOAA Center for Atmospheric Science at Howard University.  He contributed to over $60 M is externally generated research funding at Howard.   Through these efforts he helped to facilitate the development of a major field observation program with university, government, and industry partners designed to improve the ability of satellites to monitor the atmosphere from space and the skill of atmospheric models to better forecast weather, climate and air quality.

Dr. Joseph has contributed to over 50 referred publications and numerous presentations and conference papers as author or co-author.  He has mentored over 10 PhD and MS degree students to completion and served as research mentor for more than 30 undergraduate interns.  Also he and his colleagues at Howard significantly increased the number of minority Ph.D. graduates in the atmospheric sciences nationally over the past 10 – 15 years.
Joseph has participated on a variety of advisory boards, including: the U.S. Department of Energy Atmospheric Radiation Measurement Climate Research Facility Science Board, the American Meteorological Society Board on Higher Education, and the NASA Science Mission Directorate Research and Analysis Management Operations Working Group.
He presently serves as Chair of the Board of Trustees of the University Corporation for Atmospheric Research (UCAR); the National Academy of Science Board on Atmospheric Sciences and Climate (BASC); the NOAA Science Advisory Board; and the 2017 Decadal Survey for Earth Science and Applications from Space

He earned his Ph.D. from University at Albany’s Department of Physics in 1997, and spent a year in the ASRC as a postdoctoral research associate. Dr. Joseph received a B.S. in physics from SUNY Cortland.